Why the Giraffe Can't Dance 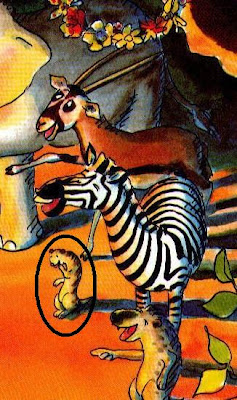 I read this book to Lulo sometimes called "Giraffes Can't Dance" by Giles Andreae and Guy Parker-Rees. It is a great little book about this giraffe who...um....what was it....oh yeah, the giraffe CAN'T dance.
Giraffes are actually my favorite animal in the whole world. I can say this with confidence because when I went to Africa on safari I fell in love with them. They are graceful and beautiful and they spoke to me. I don't know why, I just love giraffes.
Anyhow, the giraffe, Gerald, goes to this jungle dance which they hold every year in Africa and he was sort of bummed when he took his turn to dance because he was, well, a spaz. And then this cricket tells him to basically close his eyes and listen to his heart and then he dances so beautifully and gracefully that all the other animals stood and watched him "quite entranced."
I really like this book. I sort of look forward to reading this one with Lulo. It touches my heart and makes my inner giraffe happy.
So, the other day, we are reading this book and he is identifying the various animals as he often does. There is this one picture showing the animals laughing at poor Gerald (see above).
Now, see the circled animal. Yep. That little animal, I think, is a meerkat. (Tell me if it is something else, I am ok with criticism in that regard.)

Furrowed eyebrows. I am confused. "What Lulo? What is that?" You know, thinking it is some animal I don't know because last week I met my very first tapir...

"IT'S A PEE PEE, MAMA," while pointing to his penis (or rather the penis vicinity of his diaper) and then the circled animal. "It's a pee pee." More Hysterical Laughter.

Seriously, does that look like a penis to ANYONE reading this? Today he did the same thing so I KNOW it wasn't a fluke.