There are socks all over the house.  I watch sitcoms during which fat nondescript housewife follows fat nondescript blue collar male around the house bitching about how he does not pick up his towels, socks, whatever, he further does not put the toilet seat down.  I have no memory of my skinny accented mother following my hard working, albeit overweight, white collar father around the house asking him to pick up or do anything.  I am sure she’d squat over a cold, seat raised porcelain god before disturbing the state it was in to ensure my father would not be bothered.  In fact, she often would be in the middle of dinner clean up, homework, kids, washing the ashtray, and bringing him tea and pistachios when he’d ask for a glass of water.  She’d bring that glass of water and then the vacuum to clean up the stray inner shell of the pistachios.

My husband J’s athletic socks all over the house.  L is a mouse.  He pesters his brothers to be rats or cats or anything so they can play with him.  It is a club.   When they lose a tail, they get another one.  And another one.  And another one.  The discarded tails are in the kitchen, bathroom, toilet, front door, garage, several in the car, front door, on their scooters, on the steps, in the bathtub.   He is becoming a mouse.  He crawls around.  His imagination is wild.  He talks non-stop.  We had a play date today with a cool kid and his cool mom and she literally asked if he ever shuts up.  Seeing as how she too has a four year old and happens to be a teacher, it is an interesting observation indeed.

Should I love this imagination of his?  Should I embrace it?  He keeps asking me if I could just like the tails.  Could I just maybe wear one with him all day and be a mouse too?  I do sometimes because it just makes him too happy.  But now he is asking the guests if they’d like a tail.  Not a cold drink on a Pomona summer day.  A tail.   I think it would be fun to wear one to a NAWBO meeting.  “Hi there CEO of X.  Yes, I am the managing partner of a law firm and yes I have a tail on my gargantuan ass.  How are you?”

One morning we were walking into school.  He forgot to take off his tail when he got out of the car.  This is the only time he takes it off and he never forgets to do so.  He sleeps with it, he puts it aside when he goes to the restroom (now that he lost one down the toilet.)  But, he voluntarily amputates his tail before going to school which I find fascinating…I have never had to tell him to do it.  Does he know other kids would tell him that it’s not a tail at all?  And so, another Mom sort of chuckles and says, “don’t you hate when the clothes stick together in the dryer.  L you have a sock stuck to your shorts.”  {{I chuckled too…like I would wash J’s filthy socks with L clothes.}} 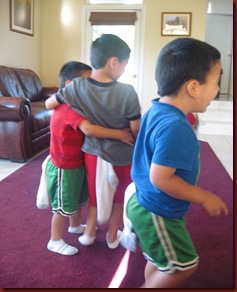 That is my tale.  And these are my mice.